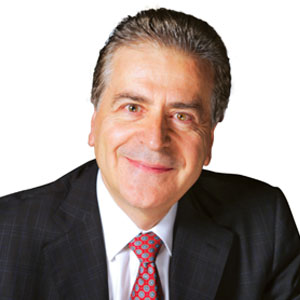 Dr. Alex Papalexopoulos, CEO
ZOME Energy Networks is both a “20 Most Promising Utilities Technology Solution Providers, 2018” and our “Company of the Year.” ZOME has years of R&D successfully migrated from what was a client-server product line to now a cloud-based web services architecture. ZOME has 11 patents issued to it around its current solution set, is in the field trial and (re)commercialization phase now, and is a company to watch due to the pedigree of their team and the scope of their technology.

As power grids add renewable sources of energy such as solar and wind, there is a growing need to accurately forecast and control Distributed Energy Resources (DERs) to ensure optimum energy supply, grid reliability, and reduce the overall cost. However, DERs have a highly decentralized and dynamic infrastructure, with a plethora of DERs online simultaneously, and its effective realization requires the ability to keep tabs on the demand as mapped to the grid supply chain, ideally in real-time. ZOME, with roots going back to co-creating the RTO/ISO system used throughout the North American energy grid, offers ColorPower. ColorPower is a cloud-based, IoT-communicating platform for optimizing DERs and synchronizing them with energy distribution. The company helps utilities achieve sustainable energy programs, enables apartment owners to “bid” their buildings for DR payments, partners with device vendors, and provides end-consumers an easy way to engage and stay in Demand Side Management (DSM) programs.

ZOME’s ColorPower DER optimization platform is uniquely designed in that one part of it is for energy management simulations, while another part is the control loop, both are integrated together, and the Precision Program Iterative Rollout methodology it facilitates is patent protected. Algorithms are “the secret sauce” and APIs enable a broad array of equipment monitoring and control. The way it operates today is, as soon as the platform takes control of the IoT energy devices such as connected thermostats and smart water heaters, its algorithms essentially learns and guides aspects of their behavior and energy usage. A sophisticated mathematical model is developed based on device behavior considering aspects such as location, the nature of the house, the climatic conditions, consumptions levels, energy program rules, device capabilities, and end- user preferences. The platform is being extended to tie-in EVs, roof-top solar, battery storage, and other DERs. The goal at the highest level is to optimize DERs from the demand-side and match as closely as possible to the up and down output of most renewable energy sources (see diagram).

The underlying technology for ColorPower was invented originally at MIT and is inspired by the adaptive feedback systems found in nature. Bees, for example, have ways to cool their hive or heat their hive depending on the outside temperature and it is all algorithms in their bee brains so it happens fast, automatically, and reliably. The general approach in the digital and AI realms is known as swarm intelligence. Each end-point reacts to a demand signal target in a coordinated manner, with the demand target signal sent to the universe of devices under control, and an adaptive feedback loop is generated allowing the demand target to be achieved quickly, providing precision in the aggregate. 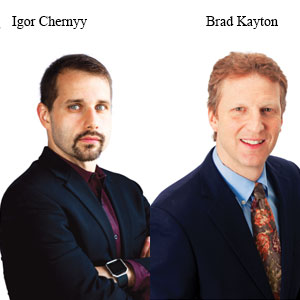 Igor Chernyy, CTO, Brad Kayton, COO and Co-founder
ZOME executives consider it their primary task now signing up apartment building owners that can benefit from Demand Charge savings or be used as a paid DSM grid resource in certain ISO areas, such as PJM, CAISO, and NE-ISO. The ColorPower energy cloud allows apartment buildings to bid their collective energy load savings automatically into their local ISO wholesale electric market; this includes individual apartment energy loads, such as from the thermostat- HVAC, and the bigger building-wide loads. The result is the “smart apartment building” owner earns revenue from their coordinated energy usage, as well as saves on Demand Charges and enjoys Energy Efficiency optimizations and savings.

ColorPower deploys a bottoms-up approach unlike its competitors in the energy management space who adopt a top-down methodology, resorting to a static, one-time calculation of the energy infrastructure. “As our algorithmic software operates at the device level, it communicates with every device on a frequent basis to ensure accurate monitoring," says Dr. Alex Papalexopoulos, CEO and Chairman of ZOME Energy Networks. As a result, the software contributes to optimized energy usage and significant cost savings. Furthermore, in contrast to the conventional solutions whose accuracy falters as the number of devices on Demand Response (DR) programs increases, ZOME’s stochastic control methodology actually gets more accurate in scale and the algorithmic software learns better with the addition of new devices. “The more devices we have under our control, the more precise and strong our software and algorithms become.”

The ColorPower platform is built on Amazon, incorporating Lambdas and other advanced sub-components for the cloud architecture now in operation from the company. ZOME’s CTO, Igor Chernyy, has built large cloud architectures and even worked at both Microsoft and Amazon.com designing their cloud products.

“Our goal was to have highly flexible and adaptable cloud architecture,” said Mr. Chernyy. “We achieved that by carefully splitting system processes into highly specialized ‘micro-services’, where each micro-service executes and scales independently from the rest, giving us unprecedented degree of flexibility. This gives us an ability to concurrently run real time scenario simulations for physical and virtual devices alike.” Combined with ZOME's machine learning, power prediction capabilities, and HVAC analytics for current thermostat-based DR programs, a smarter grid certainly seems achievable from vendors like ZOME and others on our list.

ZOME is where advanced theories with years of experience from its team meets an advance cloud computing platform with an important global mission. “2018 is a big year for us, ZOME product deployments will prove-out our novel ideas to help the energy sector move towards a decarbonized economy,” concludes Dr. Papalexopoulos. 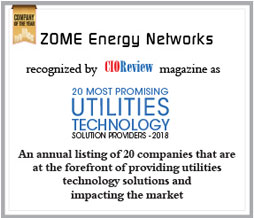 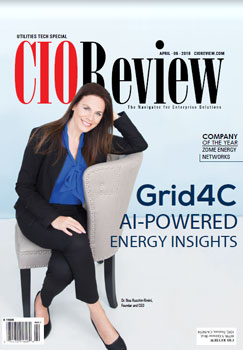