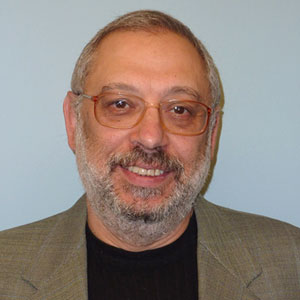 The rapid proliferation of new technologies is transforming how electricity is produced, delivered, and consumed. While offering many benefits, these changes are also increasing the complexity of power systems and requiring innovative approaches to keeping the lights on. As the operator of a six-state high-voltage power grid, ISO New England (ISO-NE) is pioneering the use of cloud computing in the power industry for these purposes. One such initiative is exploring cloud computing’s ability to reliably, securely, and cost-effectively manage large volumes of high-resolution data generated by the region’s new phasor measurement units (PMUs). These devices measure key elements of power system dynamics about 100 times faster than was previously possible, giving power grid operators such as ISO-NE an unprecedented view of real-time grid performance—as well as the challenge of processing an unprecedented amount of data.

Traditionally, Supervisory Control and Data Acquisition (SCADA) systems have been used to monitor and control power systems, measuring grid conditions every 2 to 10 seconds. With PMUs, ISO-NE can now measure conditions at a rate of 30 times per second. PMUs produce synchrophasors—measurements of the magnitude and phase angle of electricity waves that are accurately time-synchronized with a global positioning system (GPS)across a wide area. Synchrophasors provide a detailed picture of conditions on a power grid, where even slight instability can quickly spiral out of control.

After the 2003 blackout, which spread from Ohio to the East Coast in mere seconds, the U.S. Department of Energy (DOE) recommended installation of PMUs across the country and provided smart-grid investment grants to many U.S. power system operators. ISO-NE and the region’s transmission owners installed over 80 PMUs at 44 strategically located substations between 2010 and 2013, along with high-speed communication infrastructure and advanced applications to support PMU data streaming to the ISO’s control center.

ISO-NE can use PMU data to monitor system dynamics such as abnormal power oscillations with more granularity than previously possible; to perform faster, more accurate post-event analysis; to validate and improve power system models; and to prevent or more quickly recover from outages. This powerful technology is also a critical advancement as ISO-NE prepares to handle increasing operational uncertainty related to variable output from the region’s multiplying wind-and solar-powered resources, as well as the high-speed, two-way communication of tomorrow’s smart grid.

With hundreds of millions of measurements collected across New England’s power system per day and exponentially more to come through Eastern Interconnection data exchanges, the “big” data being generated from PMUs poses “big” processing and storage challenges. The software necessary for power system simulations and other real-time analytics is also computationally intensive. Finally, grid operators need resilient IT infrastructure that offers abundant redundancy and supports operational continuity after blackouts and other extreme events.

Innovative solutions, such as a central data repository and shared applications, are needed to truly realize the PMUs’ potential, which is why ISO-NE has turned to cloud computing. In late 2015,

ISO-NE completed a proof-of-concept project with Cornell University and Washington State University built on the GridCloud platform sponsored by the DOE’s ARPA-E GENI program. This is the first such application of cloud computing in the electricity industry, which has been cautiously adopting its use as security and privacy concerns are addressed.

The project sought to demonstrate a reliable, secure, and fault-tolerant cloud-hosted synchrophasor platform and wide-area monitoring system. The synchrophasor data would be streamed from PMUs to the cloud-hosted data relay and re-routed to various cloud-hosted applications, such as Regional Data Repository and Real-Time Phasor State Estimator (RTP-SE). The RTP-SE performs an interconnection-wide, time-synchronized assessment of the voltage magnitudes, phase angles, and transmission line flows throughout the power system and provides common visualization displays for real-time collaboration among grid operators, who can subscribe to each other’s PMU data or retrieve historical data from the central repository. 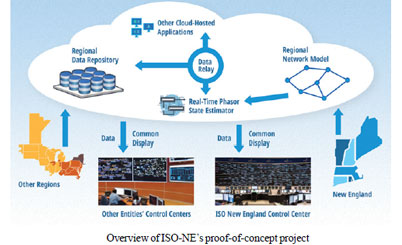 Demonstrated Results and Next Steps

For the project, ISO-NE and Cornell were used as two distribution points of PMU data via encrypted secure shell (SSH) tunnels to two redundant Amazon Virtual Private Clouds (VPCs) in Virginia and Oregon. The cloud instances were managed by Cornell’s open-source software CloudMake and VSync.

The focus was on assessing security, network latency (i.e., time delay), fault-tolerance, and consistency of data processing. Results: The latency due to encryption of data in transit and at rest (cloud archive) was satisfactory; the average round-trip from ISO-NE in Massachusetts to the RTP-SE in the cloud and back to Cornell was 350 milliseconds via the Virginia data center and 425 milliseconds via the Oregon data center. Data consistency was confirmed between the two data centers. Each data center had 13 cloud instances, with a total average cost of 2.47 dollars per hour per data center—an overall cost savings compared to the IT investments which would be required by each grid operator for similar performance. Finally, full back-up redundancy was restored within 5 minutes after data center shutdowns.

Overall, the project successfully demonstrated a cloud-hosted synchrophasor platform for real-time PMU data processing, archiving, subscription, and shared advanced applications to improve wide-area monitoring and situational awareness of power systems. During the next phase of testing.

ISO-NE will explore cloud-based automatic generation control with synchrophasor data to further improve the system’s resilience after catastrophic events. ISO-NE will also continue its work leading the power industry in deploying power system simulations in the cloud to achieve elastic, high-performance computing capabilities in transmission planning studies and looks forward to building upon and disseminating the knowledge gained throughout the industry.

How Path To Production Ensures Safety And Soundness On Our Digital...

Bringing People And Technology Together

Reaping What You Sow From Cloud Computing In Variable Industries